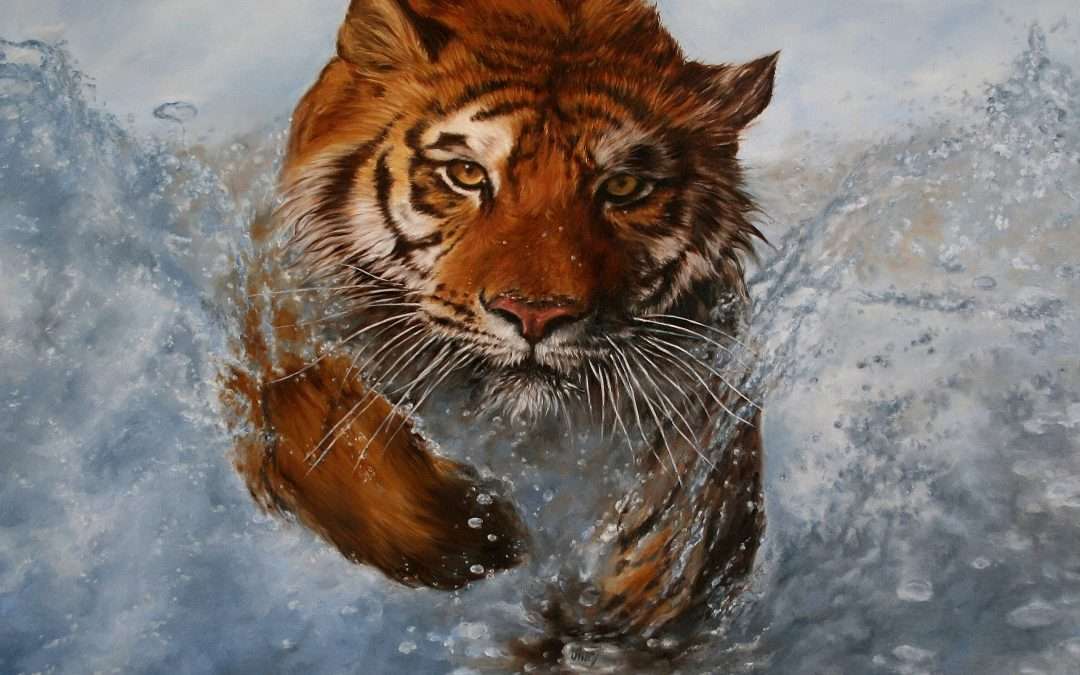 The Ox stamps away and the Tiger stalks in, ready for its graceful leap that can happen any moment!
As majestic as the Tiger are the stealth and swiftness of its attack…

Just put on your cosmic seat belt as this year promises an exciting, fierce and full power ride!!
Sparkled with love, balance and unity?
It is a high aim to achieve but indeed the way to make the most of it!

Opposite energy of the Yin Ox year, the Tiger is Yang in the Chinese astrology,
although the Tiger in the Taoist Cosmology represents the Yin, the Divine Feminine and the Earth.  As the Dragon represents the Yang, the Divine Masculine and the Heaven.  They are equally important, the mystic Dragon and the Royal Tiger (in Asia the Tiger is the king of the animals and not the lion.  I like to call her the Queen!).  They always come up as the winner in a fight, but if they do fight one of them dies.
Saying this, in my personal view, I like to look at them as cosmic lovers (instead of mortal enemies), as Venus and Mars, complementing each other. 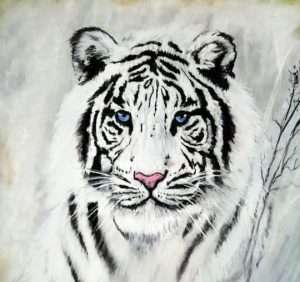 Around us, we have the Five Elements, and in this mundane plane, the Green Dragon is the guardian totem of the East, the White Tiger the protector of the West, linked with courage and confidence and the Metal Element, which is associated with the planet Venus (aka the Goddess of love and beauty) and we are in a Venusian year that vibrates with the frequency of the number 6.

2 + 0 + 2 + 2 = 6 the Universal friend, the number of balance, of love, always starting with the self-love, of unity, representing the union of the Divine Feminine and Masculine which also starts within.
A year of the lovers!…
A very harmonious number that also can be associated with luck (think of the dice you roll and when you get a six).

Interestingly Jupiter is going to be quite active this year, the planet of good luck, so grab the opportunity and make your luck!

But the number 6 also vibrates the frequency of unconditional love and therefore the embodiment of the heart.
A Kuan Yin and Jade Priestesses year who walks her path!

We see the image of Kuan Yin with her dragon, but I had a vision of Kuan Yin riding a Tiger.  The message was to embrace the fierce feminine from a compassionate heart space.  Which for me is the essence of the Tao (Way) of Feminine Empowerment, balancing the powerful polarities of the feminine nature, which are essential to bringing the so-needed balance into the world.

But you can actually find the Tiger as a vehicle for Taoist deities: they could control the Tiger Spirit***.
For example, Hsai Shen, the God of wealth, rides a Tiger that brings good fortune.

*** The Tiger Spirit represents the raw power of courage and strength and is
regarded as a protector spirit. But, it is also believed to possess the powers of inviting wealth and prosperity.
Adapted from Harry Leong.

Back to numerology, we also have the frequency of 22, which is a master number, the master-builder that offers a strong foundation to materialise dreams into fulfilment!
So not surprisingly associated with sacred geometry measures.
And is the number of Mary Magdalena, the ascendant master that will keep rising strongly.

As grand as the Tiger actions, is his entrance into the New Year, following the usual Lunar Calendar and starting with the Aquarius New Moon, but also on the day of the Imbolc Pagan Festival, that follows the Solar Calendar, both celebrate the first signs of the Spring deep inside the Earth, the Goddess awakes…

The Imbolc, the midpoint between the Winter Solstice and Spring Equinox, the celebration starts on the sunset of the 1st to the sunset of 2nd February.
It honours the Celtic Goddess Brigid (Christianised as Saint Brigit), she represents regeneration and light, but also has yang and yin aspects, being a Goddess of fire, creativity and fertility, but also of compassion, hearth and home.

Now as the Aquarius the Tiger is independent, free spirit, deep thinker, a rebel and even a revolutionary, they love their freedom and can’t be told what to do.  They are great humanitarians and can be great leaders when of course, channelling their power positively.

The Tiger comes to give force to this New Era of Aquarius.
I ask you:

Are you a Light Warrior? Are you embodying the change you want to see in the world?

Ride your tiger or just embrace your roar, this is the year of great leaps!

“The Water Tiger 2022 brings power, passion, and daring. Now is the time to pounce, take a risk, and start new endeavours. Brave and bold actions are rewarded. No matter how many obstacles stand in the way, Tiger’s courage will not diminish.” Susan Levitt

The Water Tiger is calmer, known to be more open mind and compassionate, so this will bring time this year to breathe through all the Tiger’s dynamic energy, which is also coloured with lots of creativity and passion.

It is a year of big and quick happenings, so be ready!

The Tigers are also very sensitive: the water aspect may enhance this so make your emotional health and harmony a priority.  Another thing to support this is to keep grounded and breathe consciously, as we do in Qigong and Tai Chi.  We have various positions/exercises and martial arts styles inspired by the Tiger…

To feel is to heal, but if the emotions are not dealt with, drama and emotional outbursts are known by the short-tempered Tiger.

But the Water Element can also enhance the psyche power, so a reminder to follow your intuition, as the Tiger follows his instincts. 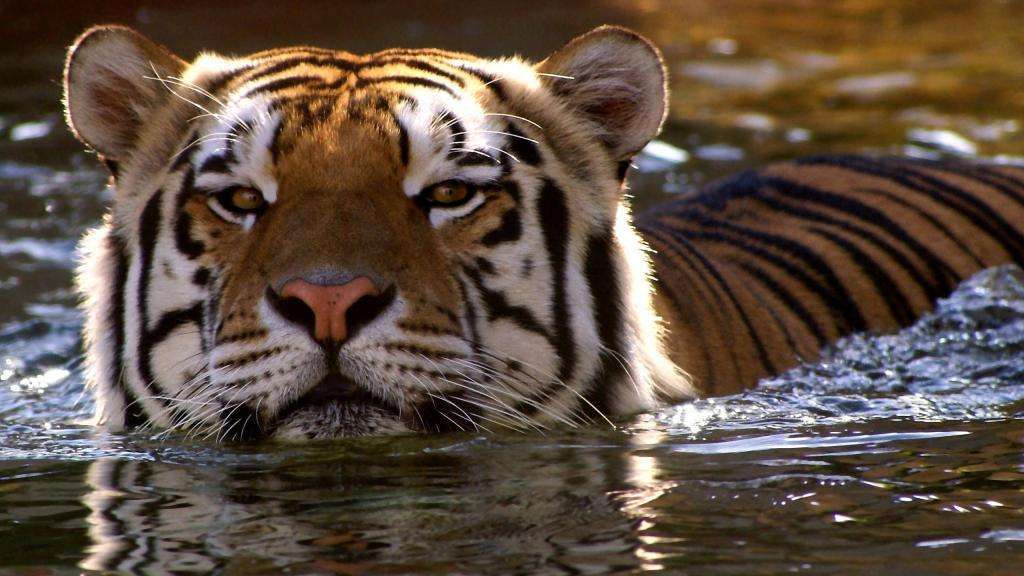 To reinforce this, the Water connects with the sexual organs in the body, from where our creativity and power rises, the womb wisdom that translates the inner wisdom.

A great tool to harness the above is the Jade Egg, which is also deeply connected with inner alchemy as believed to be the solidified semen of a dragon, the most powerful yang energy when inside the most powerful yin energy (a woman’s sexual organs), translates into profound harmony.
But besides the Jade Egg being an incredible self-healing tool, it can be approached also as a magical talisman.

Talking about talismans, the Tiger’s Eye was a protective crystal from ancient warriors to the present day, also promotes the balance of extremes, the yin and yang within while supporting personal power and the ability to accomplish goals. 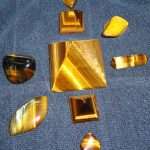 From the yellow common Tiger’s Eye, which grounds the solar ray energy into the earth, you can also find Red Tiger’s Eye and Blue (aka Hawk’s Eye), enhancing sexual creative energy to psychic powers respectively.
Another combination of minerals makes the Iron Tiger’s Eye which greatly supports physical health, with other things strength and stamina.

Paradoxically, his two main shortcomings will be rashness and indecision. If he can learn to take the middle road, the Tiger will be a roaring success.
Adopted from Theodora Lau. 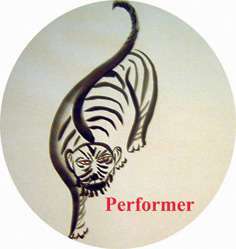 The fearless Tiger who can be seen as the performer, being life his stage, can also be found in the tree hiding instead of facing a difficult decision.
So use the tree, not to put off what has to be done, but to retreat and recharge before your next leap.  Retreating is a fundamental act of strength (and not of weakness!).

Let’s wrap this up by looking at the Tiger’s striped coat, representing the yin and yang, the balance of these energies confers great power.  For me, not just a year for thriving for this, but as a Taoist, a life!

How does the Tiger resonate with you?

The tiger is the largest living cat species: do you have a small tiger living with you? 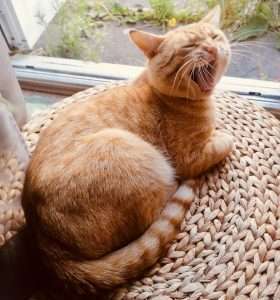 Well, I have a Tiger who came to me, and I’m not talking about my shamanic journeys or dreams, but an actual marmalade cat who roams around the neighbourhood and adopted me when I come back from India at the peak of the pandemic.
Garfield, the Tiger of the Neighbourhood, the Purring King, as I call him.  With the many hours we spent together, he gave me an insight into the feline mystery and keepers of the secrets worshipped in ancient Egypt and present Thailand “The Siam Kingdom”.
He is a sweetheart and keeps inspiring me with his great stretches and powerful pace: he always makes such an entrance!

Connect with your Inner Tiger and give it all to fulfil your wildest dreams!
Go for it and Roar Your Dreams into Reality!***

We have a programme to support all the above, starting this Saturday 5th Feb. with the ONLINE CIRCLE: Manifest the Life You Want with the Chinese New! 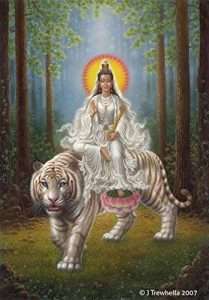 Check here our Calendar, with our full programme of the Tao of Feminine Empowerment in the path of Kuan Yin which offers the tools to live your Fierce Feminine along with the Compassionate Heart.  From monthly Circles to weekend workshops, to Kuan Yin Qigong course Online to in-person Retreats. 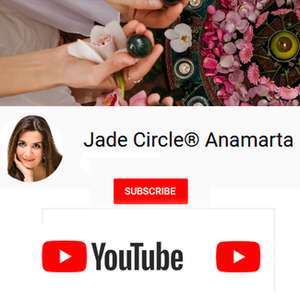